The saddest moments of my life as an editor come when I learn that a guest editor of The Best American Poetry series has passed away. Charlie died about five months before his 85th birthday. Born in Belgrade in 1938, he had dreams and memories to draw on from his early childhood in battle-torn, Nazi-occupied Yugoslavia. In A Fly in the Soup, his gripping memoir, Simic recounts growing up in war-torn Yugoslavia: “My family, like so many others, got to see the world for free, thanks to Hitler’s wars and Stalin’s takeover of Eastern Europe. ” As the war went on, Simic and his little friends played soldiers: “A little older boy had disappeared. Turns out he snuck out to watch the bombs fall. When the men brought him back, his mother started hitting him hard and screaming that if he did it again, she would kill him. I was more afraid of their slaps than of the bombs.” When the Americans arrived in Belgrade, they took the Simic family to the barracks and gave them chewing gum, chocolate, bacon and eggs.

Perhaps the happiest moment of Charlie’s life came when he and his family arrived in America in 1954. Charlie and his brother watched a Dodgers Giants game on TV, ate burgers and fries, and ended up at a jazz club (the Metropole): “I was totally engrossed in the music. That was definitely better than any radio. It was heaven.” He also wrote, “Reverence is my religion, and the mystery is her church.”

Charlie loved jazz and jazz clubs and the philosophy of the pub. He wrote poetry that was critically labeled as surreal and worked in a highly innovative way with the form of the prose poem. When he received the Pulitzer Prize for a book of his prose poems, it marked a major event in the history of the genre invented by Baudelaire and made a tradition by the French (Rimbaud, Jacob, Michaux, Ponge, Char).

Working with Charlie on The Best American Poetry, I remember the poems that blew our minds – we were obsessed with “Nostalgia” by Billy Collins, then a new voice, and we had poetry by Lawrence Raab, Carolyn Kizer, Elizabeth Spiers, Alice Fultoin, Galway Kinnell, Charles Bernstein. When we met for lunch or dinner after that year of close reading, we talked as much about jazz and popular songs as we did about poetry. Charlie loved the female singers of the 1920s and he made me recordings of Lillian Roth (“Tell Me, Why Am I So Romantic?”) and Bee Palmer (“Please Don’t Talk About Me When I’m Gone”) and great ones Piano music he recorded in bars. Someone could be heard shouting “hey Paulie” in the background – people at the bar carrying on their conversations, music or not; Charlie thought that was great. Wine, he knew his wines and one of his favorite restaurants in New York was the Provence on MacDougal Street near where I live. – DL

At the inaugural reading of Best American Poetry 1992 organized by William Wadsworth for the Academy of American Poets. As I recall, Jonathan Aaron, Agha Shahid Ali, Lynda Hull and Rosanna Warren read their poems from the anthology after I opened the evening and introduced the book to Charlie. 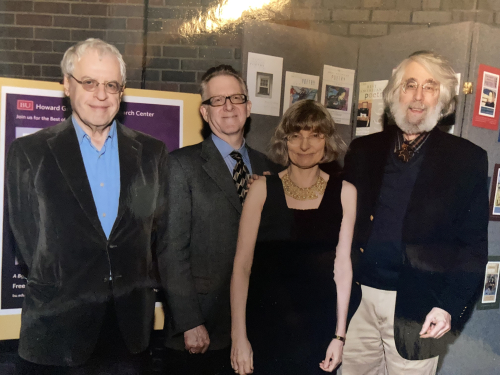