“And The Fire Next Time by James Baldwin, who is a troubled writer,” Bruce Friendman spits into the microphone at the Oct. 6 Clay County District Schools board meeting. Baldwin’s classic is among nearly 2,000 books on a list that Friedman, president of the Florida chapter of No Left Turn in Education, says are inappropriate and will challenge in the district. If Friedman’s name sounds vaguely familiar, it’s probably because he became famous in right-wing circles after his microphone was cut off at a board meeting in late June while he was explaining several.

Florida has been an epicenter of book bans for the past 18 months. Moms For Liberty was founded in Brevard County, and a series of new laws statewide, including the Don’t Say Gay Act, have created an environment ripe for censorship. School districts have implemented various measures in hopes of complying with the regulations. In some communities, this has resulted in books being banned or never appearing on the shelves; others have involved developing stricter library policies for materials that may be in the collection and allowing parents to choose whether or not their students have access to school libraries at all.

Over the summer, Clay County reviewed its policies on school library supplies to bring them into line with House Bill 1467. Because legislation was implemented so quickly at the state level, the new guidelines were adjusted on an emergency basis. Opened for public inspection and review after its development, the Board of Directors voted to approve the new manual at the August meeting.

The updated handbook with redlined additions is available in full here. The handbook describes each Florida State Statue in terms of library materials in schools. A section on student access rights to material has been removed from the manual:

Banned Books Week was abolished as an annual celebration: 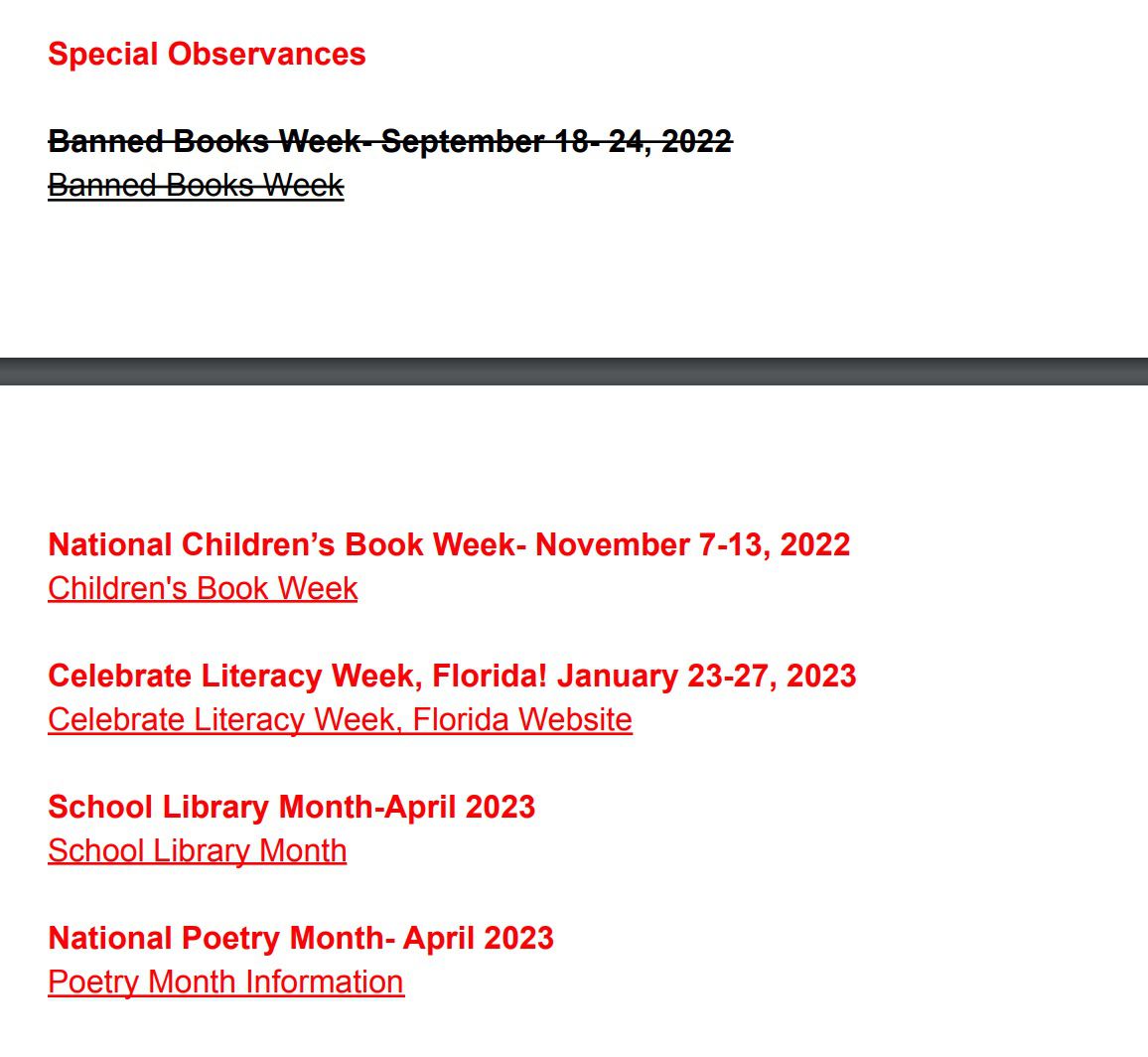 And the selection criteria for materials in school libraries have been redefined, emphasizing three main purposes of collection and ensuring materials do not meet the definition of pornography. It also expands the number of people who can be involved in the material selection process: 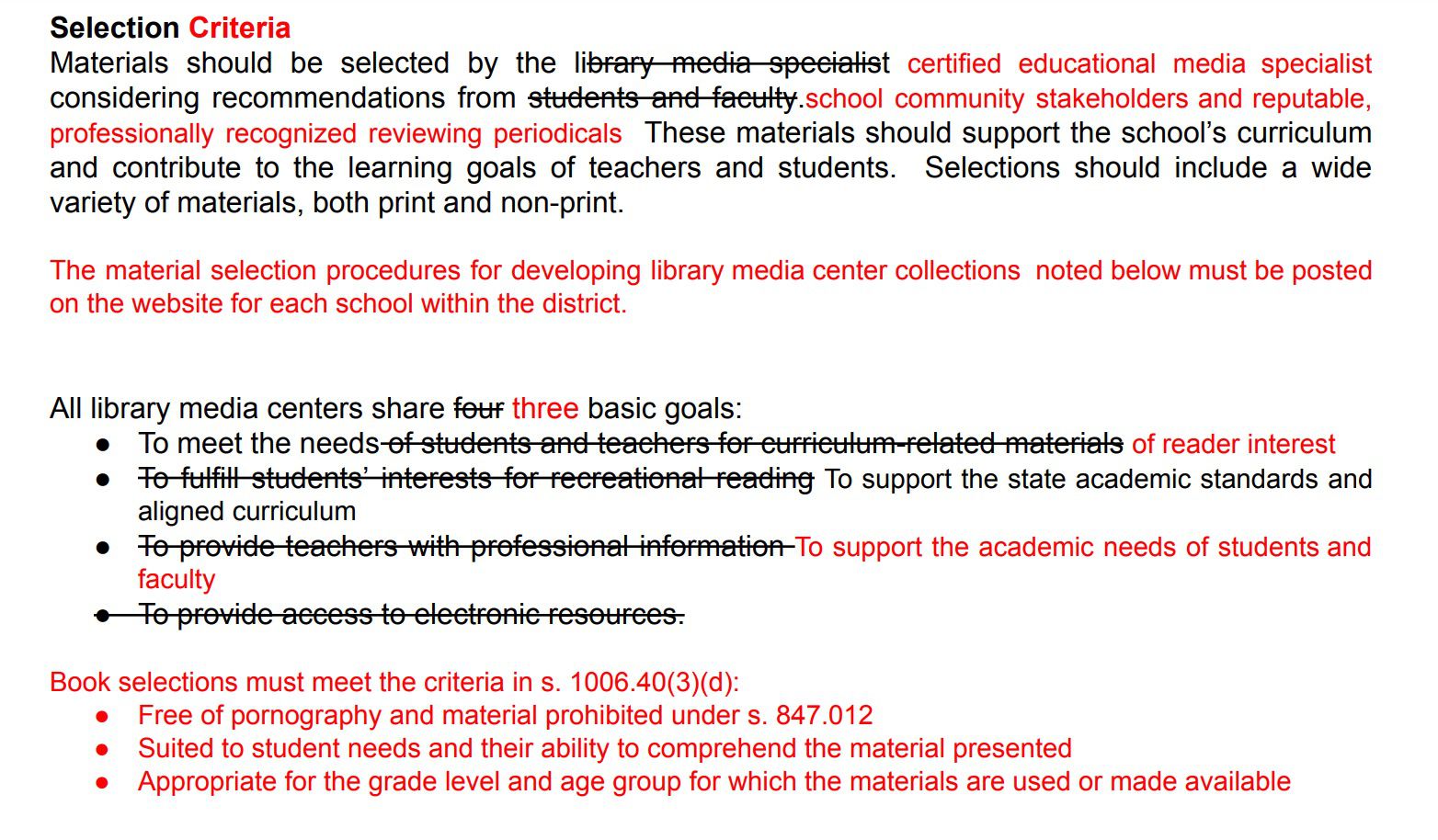 The handbook goes on to offer who makes up the committee when materials have been appealed, along with a timeline from when the appeal was lodged, through the meeting, to when the materials – if retained – are returned to the shelves. Any decision about material applies to books across the district; If a picture book is removed from the school that initiated the challenge, it will be removed from all schools in Clay County.

Although the material will be removed from the shelves during the review period, there are no requirements for persons who are part of the review committee to read the material in its entirety.

In fact, even the person filing a complaint need not have read the material.

The final decision rests with the district superintendent, and if the person who made the complaint disagrees with the superintendent’s decision, they have 10 days to appeal. These objections then send the book to the school board for a decision.

Clay County District Schools currently have two Moms For Liberty members on their board of directors. The Conservatives held a 3-2 majority on the Executive after the last election.

If a person who submitted a book complaint does not like the outcome during the first meeting with the committee, which includes administrators, educators, and community members, they can appeal that decision to the school board. This school board, now in the hands of right-wing “parental rights” advocates, can decide based on their values, rather than what the policy says — or what is right for the students they claim to serve.

Book challenges are pouring into Clay County District Schools. Even before the new Materials Challenge Policy, Clay County was an example of how books are being banned in America. One notable thing about the school district that differs from most other districts in the country is that the superintendent is an elected position. David Broskie, the current Superintendent, was elected in March 2020.

The Clay County School Board itself was not without controversy. Following Friedman’s comment in June, Ashley Gilhousen, who sits on the board, not only spoke to Fox News about the need to remove “pornographic” books from the library, but also called for disciplinary action against the school librarians who allowed those books. 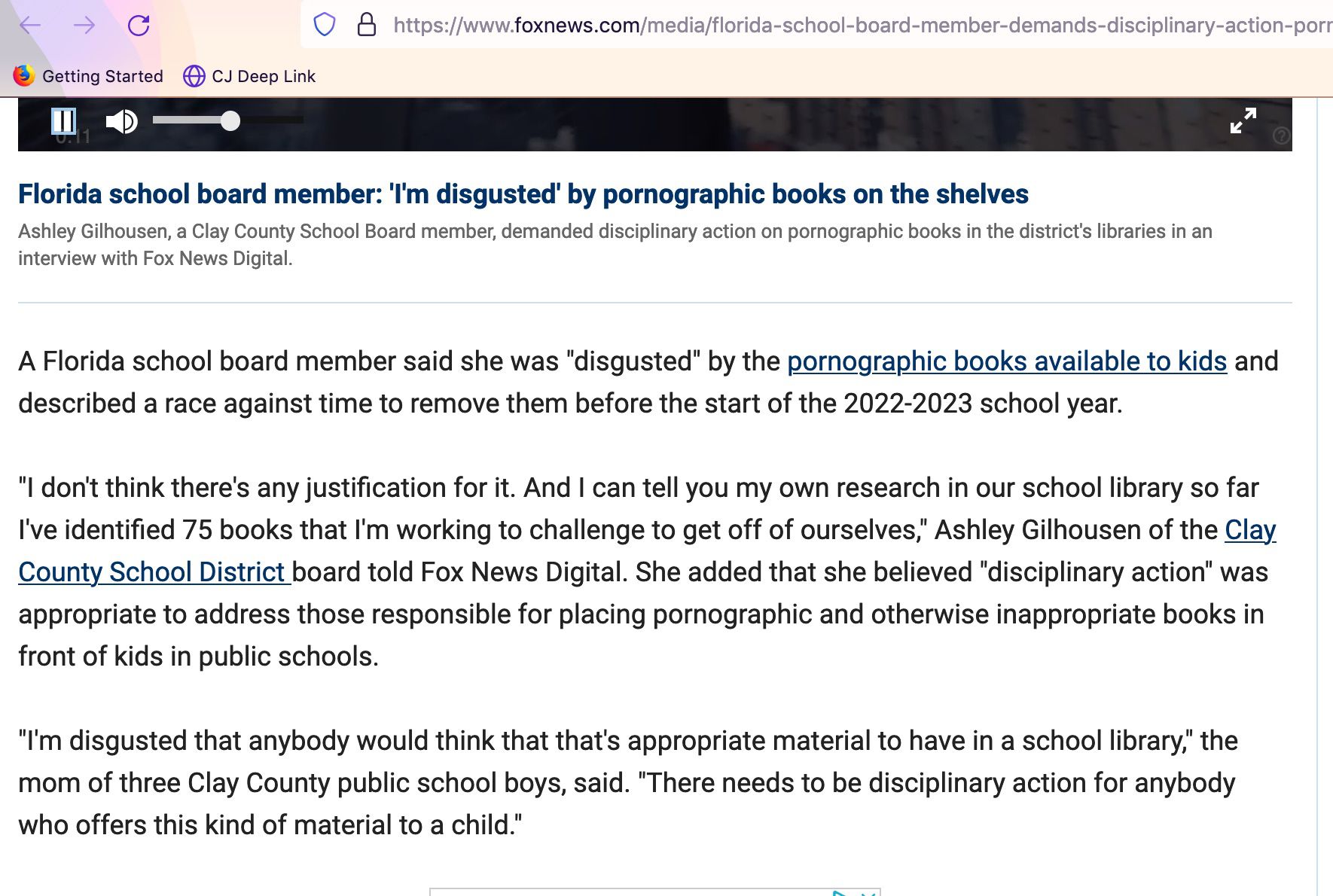 Gilhousen goes on to say that the reason these books end up in school libraries is because of “bonus” books that publishers include with school library orders (a complete untruth).

In updating their book selection guidelines and as part of new state laws, Clay County has made their guidelines publicly available. They reflect what is in the broader manual and emphasize compliance with state statutes. Of particular note is the last line about sex in printed matter:

In other words, sex in books and whether or not it’s legal is open to interpretation. There is no indication in this policy, in the material challenge policy, or in the library handbook more broadly that the definition of profanity is met by the three-point Miller test.

It is therefore odd to see a list of books currently listed as the “District Reconsideration List” on the Clay County District Schools website. The list, which currently stands at 100 titles, includes a number of books, including classics of American literature such as Beloved and The Bluest Eye by Toni Morrison; essential and award-winning young adult literature including This One Summer by Jillian and Mariko Tamaki and Looking for Alaska; and new books including Mary HK Choi’s Yolk. These are the books currently being tackled through challenges from the likes of Friedman, Board Member Gilhousen and others involved with local chapters of No Left Turn in Education and Moms For Liberty. They are the first 100 of almost 2000 expected challenges.

Why should librarians discard new books?

Why should librarians discard basic texts that support the academic needs of students and faculty?

Why would librarians remove popular and award-winning books from their collection?

In fact, the removal of the 40+ books listed under “retired/deselected” above is not consistent with the district’s own retirement policies in the new library handbook:

It’s quite impressive to imagine that within a matter of weeks, the librarians at Clay County District School would have heard, read, and fulfilled their professional responsibilities regarding books like The Fire Next Time, per Friedman’s complaints at the October school board meeting. Especially since the book, its content and its author are classics of the American literary landscape and support both the intellectual and recreational needs of the students.

While sorting—the systematic removal of obsolete, old, or unused materials—is a common practice in libraries, deselecting—identifying materials that do not conform to selection guidelines—helps ensure that a library does not inadvertently do so contains inappropriate material of Clay County, they are cited as the reason why books that are contested within the district disappear.

This public record of book challenges and their status is a clever way of shifting the responsibility for censorship from those who have taken it as their responsibility according to the manual and into the hands of librarians. It combines regular library maintenance practices with book removals in a way that not only undermines the professionalism of library staff, but actively harms students who are deprived of access to massive works of literature without due process.

A procedure developed by the district.

A due process whereby the superintendent-elect – or, in the event of an appeal, the school board – has the final say on whether or not books remain in schools.

Due process, which is nothing more than a circle where the political agendas of conservative bookbanners can file thousands of complaints, take them through the district’s new process where no one has to actually read the material, appeal the decision to the school board, and meet a like-minded, politically motivated representative. People like Bruce Friedman, whose agenda is loud and clear, can decide what students have access to, knowing that even if they lose their first case, they can turn to people like Gilhousen to get the job done.

Not only are the students losing, but now librarians and educators are being empowered to look like the enemies here, when in reality they had little to no say in the process.