Ed Poe, a longtime supporter of the Bretton Woods monetary system, has advocated a new standard for gold exchange. Congressman Poe (Republican, Texas) introduced legislation that would return the nation to a gold standard, albeit in a drastically revised form.

“For anyone living under a rock, the price of a troy ounce of gold is now officially in bear market territory,” said Alice James Jones, who covers the sector for Cantor Fitzgerald. “What Ted Poe is proposing is a sort of reverse bailout for investors — whether in bullion or in gold mining stocks — that are spinning in the wind.”

According to Poe’s plan, the dollar would be pegged to gold at a certain price. Let’s say the stake is $1,300. When gold exceeds this number, the Fed sells bonds. Below that number, the Fed would inject money into the system by buying bonds. “An effective gold standard can be so simple,” says Steve Forbes, the editor of Forbes, who ran for president on a business-friendly platform focused on a flat tax. (See “New, Poe-tent Gold Standard,” Forbes, May 27, 2013, p. 15). “The basic gold-standard principle of the Poe calculus and its peculiarities provide a lot of grist to the mill, which is only for the better,” says Forbes, which sounds like a tepid endorsement, but he really likes the idea.

In his keynote address at the Gold Bug Convention in Jackson Hole in May, Poe said he wanted “to usher the US into a new era of fiscal correctness.” He painted a bleak picture of current uncertainties. “If you’ve ever experienced a financial crisis like the ones that hit Lehman in 2008 and Detroit this year, I don’t need to tell you how scary it is. I watched a barely noticeable crack widen so fast my brain reeled. I saw the mighty walls fall apart. There was a long, stormy cry like the voice of a thousand waters, and the deep and dark lake at my feet closed sullenly and silently over the fragments of my life.” Poe, who writes his speeches himself, delivers them without notes.

The gold standard, the anchor of US currency, died on August 15, 1971. President Nixon issued the directive. He felt he had little choice. The cost of the Vietnam War and the ongoing US trade deficit forced him to do so. Realistically, the dollar could no longer be backed by gold bars on the $35 an ounce basis. “The change was announced as a temporary measure, but like most of these measures, it quickly became permanent,” said Cantor Scott Fitzgerald, who oversees the pension plan for the Mosaic Law and Tile Society, the nation’s largest non-prophet. Fitzgerald, who quotes Keats and other greats, jokes a lot, and laughs so hard he sometimes seems on the verge of bursting out, usually makes this reporter feel like a sophomore majoring in a high school class dismal natural sciences has advised. “From now on, American money would not be backed by a metal but by the good faith of the United States government, with the result that the value of currency fluctuates with the value of gold.” 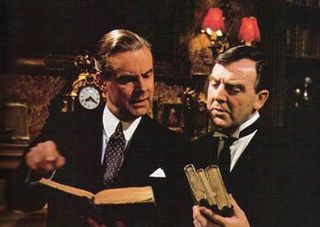 Little complained about at the time, the gold standard has lived on, just as a repressed memory takes on sinister forms in dreams or in waking life. In an infamous TV commercial that only aired once, Bunter (right) advises Lord Peter Wimsey (left) to hire a smart city broker (played by Max Shylock) and allocate 10 percent of his wealth to commodities or shares in mining corporations. “Even at a three year low, an ounce of gold is worth over eight hundred pounds m’lrd and you get a free smartphone plus ten thousand frequent flyer points if you play your cards right, close to the chest huh?”
The metal’s decline in global markets has been attributed to the likelihood of reduced monetary stimulus from central banks amid a slowdown in China’s growth rate. “The logic is not unassailable,” Eddie Cantor said with a crooked smile. “But, to paraphrase Gertrude Stein on roses, it is what it is.”