I ended the 2022 edition of the Signes d’Automne program at Studio Regard du Cygne with a performance called Welcome by Joachim Maudet. On the corner of Rues de Belleville and Pixerécourt in the Belleville district of Paris, Regard of the Swan has been offering contemporary dance and performance since the 1980s. It continues the mission with Brio.

Maudet’s work as a choreographer and performer is a good example of how the small studio (I think anyway) is promoting an Isadora Duncan-inspired “creative dance performance for all” agenda. Wel come succeeds in a mixture of slow and motionless and ventriloquism with just the right spice of light, sound and space. In short, the work impresses with a thoughtful and respectful approach to ordinary human perception and its choreographic uses; makes viewers think and laugh.

Also on the menu were the recurring adult and children’s versions of “Spectacles Sauvages” – presentations of new creations or new productions in Paris. That year, a last-minute call yielded three remarkable new creations and one truly amazing stand-up performance piece: Mécanique de l’invisible by Gaëlle Gillieron; Parasite et bottes-de-plume, a very physical duo of… what? … “Behavioural Typology”, by performers Simon Peretti and Marius Bathaux; and Débordement, a choreographic-music creation starring Delphine Jungman and Aston Bonaparte, performing to original music by Patrick Biyik. The finale is en pièce jointe, a brilliant performance by Armande Sanseverino and Gaël Germain, which brilliantly shows what happens when the digital stream stutters. To top it off, there were events such as the talks between dancers and viewers, moderated by dance philosopher Karima El Amrani, and the Regard’s annual “Family Day”, this time with Le Lapin et la Reine (“The Queen and the Rabbit” ) in (French) Sign, moderated by dancer and choreographer Nina Vallon. 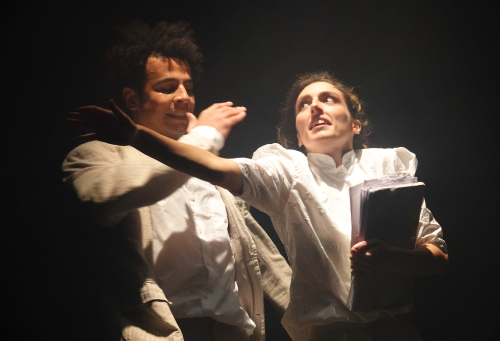 There is a lot to say about each of these diverse performances, initiatives and events, but in my opinion the main bill of autumn 2022 goes to the two-day “Festival SOUM – Soirée de co-création Franco-Coréenne”. Festival SOUM is a (South) Korean contemporary dance ensemble. The soirée revolved around mixing Korean and local movement artists in short co-creative residencies and producing the results on the first evening – the artists had no prior experience with each other – and the next day with pieces from the visitors’ repertoire. It was a decided audience and an aesthetic success.

Both a distant image of dance performance innovation and an echo of Regard’s “dance performance for all” mission, the two-day soirée held a made-in-Korea mirror for much of what the studio is trying to accomplish on its own turf.

Aside from a general hunger for novelty, people from the European cultural sphere seem open to cultural productions with a Korean perspective – see the film Parasite or the TV series Squid Game. Why not contemporary live performance?

Like Taiwan, another place rooted in a strong and vibrant traditional culture that has managed to transform itself into a liberal society, Korea seems to be a hot spot for global contemporary culture. In contrast to contemporary work from Taiwan, the only live performance from Korea I had the pleasure of seeing prior to Regard du Cygne’s program was Gangnam Style’s version of Zumba – all by itself. I think my situation regarding Korean live performance culture, let alone Korean contemporary dance, is pretty typical. Well, good job for my culture, Attention programmers. 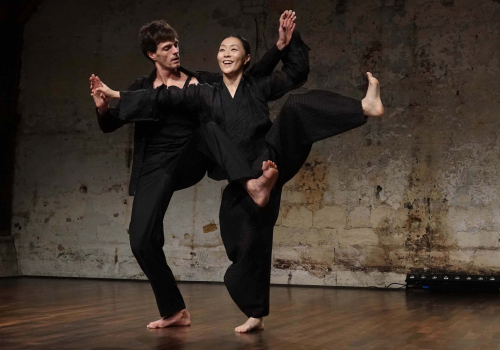 Whether in collaboration with locals or in previously developed work, loving and intriguing splashes of unknown culture graced the SOUM-inspired performance. But contemporary dance, Capital D, was clearly what happened for everyone, performers, choreographers and spectators alike. SOUM choreographers and performers are full owners of a “global” art of contemporary dance which, like breakdance or hip-hop, is a world dance mode, by definition exotic to no one and open to all.

As I said, the festival SOUM – Soirée de co-création Franco-Coréenne was an initiative with the right approach at the right time. Regard du Cygne was the right place for it.

Regard is one of the last dance venues, perhaps the last independent contemporary dance venue, in the Paris intramuros where you can still see ‘untested’ talent and movement art creativity. But the studio’s all-female management and staff are not only willing to check out and even risk what an untried creator has done, the venue is optimized for the task. Materially and morally, Regard du Cygne creates a sense of ‘being there’, which for me is the key to appreciating particularly new, untried work.

Regard du Cygne is a materialization of an intimate setting.

Railroad flat-style ticketing, reception, kitchen, and bar areas, as well as a well-planned event space of polished parquet, bare stone, and aged beams, are more than functional. The seating in good Lego-style stands is perfectly adequate for the usual dance performance, which lasts a little under an hour, is flexible and does not waste any space; Lights, sound, visuals and acoustics are as good as any.

An interior door at the top of the performance space leads into a building that serves as a backstage and as cloakrooms and storerooms. Perhaps most importantly, the building serves as the upper wall to the central cobbled courtyard. The courtyard is dotted with green, mostly flowering plants; Furnished with a few camp tables, chairs, and a bench, it’s a natural gathering place for viewers and creators alike.