At Studio Regard du Cygne’s two-day Soirée de Co-Création Franco-Coréenne with Festival SOUM last fall, spontaneous collaborative creativity and a fresh look at the familiar was evident in every performance. SOUM is an international contemporary dance company with a mission to showcase contemporary dance performance creations from Korea.

I was deeply impressed by the quality of the program’s collaborative work, but I was particularly intrigued by the show approaches (choreography) and narratives (intentions) of portions of SOUM’s dance performance pieces. I hadn’t thought much about it before the Regard du Cygne soirée, but as contemporary dance performance is, at its most fundamental level, about an individual experience of movement, it will primarily show and tell about individual experiences of culture and their perspectives.

And that’s exactly what I had with every piece of the Soirée de co-création Franco-Coréenne program: Show and tell contemporary dance performance through the experience filter of a culture I don’t know. Let me put it this way. When I first came to France, I kept bumping into familiar things and fumbling around with familiar purposes because although things look very similar everywhere, the measures are different. In high spirits and of course without the bruises, my experience of our Korean friends’ work is similar to this: I was reminded to always adapt to differences.

Day one’s features were Couleurs and Want, both co-creations put together during a three-day residency at Regard du Cygne.

Couleurs by Sun-Hoo Yoo, a choreographer and dance performer from Korea, and Marco Chenevrier, a dancer, actor and performer working between France and Italy, was a kind of highly cultural “game show” that involved viewers and performers alike in the interpretive movement and sound. Yoo told me that she and Chenvier incorporated Couleurs into the framework of one of their existing choreographies.

Want – performed by guest dancer Seisung Lee and Parisian cellist Aurore Daniel – which I annotated as “musician-dancer interaction in orbit: an atom” – was, as far as I know, an original put together during the Belleville residency. It was wild. I like a punk cello.

With audiences milling about in the seats and around the edges of the stage, and requiring active audience and performer engagement, Couleurs was a risk as a performance. Yoo and Chenevier improvised choreographies to music chosen by viewers, while other viewers conspicuously interpreted their own feelings using colors on a whiteboard. The newly met artists then performed what Yoo called “Two solos in each other’s shadows and two duets where we meet.”

Notably, despite their differences and brief acquaintance, neither Yoo nor Chenevier “stepped forward” or “pulled the partner along” or “stepped out” or “lagged” at any point within their duo. 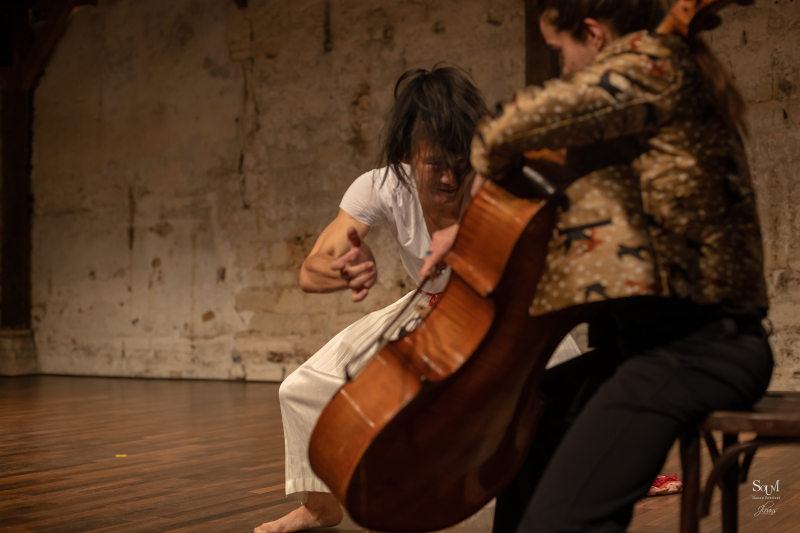 After the performance I was sure that Yoo and Chenevier shared a choreographic approach that owes much to circus and cabaret and a penchant for risk in search of authenticity. I also thought I understood that when Yoo says, “Two solos in someone else’s shadow…” she means something like “dancing where one of us is the shadow personality,” not meaning “one of us in the background.” . Even when she says “… and two duets where we meet,” she deliberately positions “duet” as “a dance of two dances” rather than “a dance of two people.” In other words, Yoo and Chenevier’s remarkable ability to stay in sync was not just a professional courtesy, but a parameter of their choreography (and perhaps Yoo’s frame choreography). They were not just “there” (with a scope for each individual’s personal expression), but “there because (the other is there too)”. synchronicity, not synchronicity.

I sensed cabaret, circus, risk and, above all, the desire for synchronicity in Want.

Want’s program notes stated: “[Seisung Lee and Aurore Daniel] found [and then pursued and realized] a shared thirst to let their feelings and sensibilities escape to the outside world through their movement and sound”.

They did it too, slipping into breathless showman mode as they engaged in intense personal effort to ignite a synergy of body, instruments, movement and sound between them in a personal engagement. Seisung Lee danced in Aurore Daniel’s musicians’ room (looking not only for the music but also for the person producing it). Daniel, her cello shaking and panting, opens into Lee’s dance space (which not only inhabits Lee’s dance, but his panache).

On the second day, for the Korean-produced performances of the program, in addition to the showmanship and search for synchronicity that I also found in the co-creations, it seemed to me that there were different framed perspectives or unexpected conclusions from the same information, different types of the use of things, along with occasional innovations in power use. 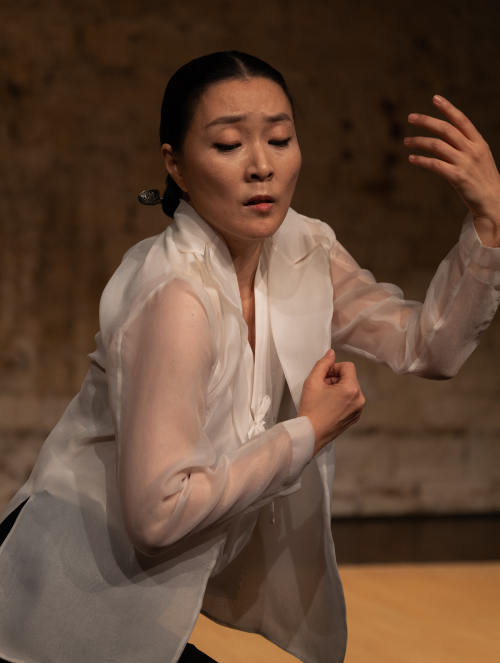 For example, Kyung Shin Kim’s Homo Lupiens (“Anagram Human”) uses ambiguous man-machine costumes and “robot gestures” to inquire about the “homo meta” thrown into the homo faber currently fighting it to reinvent homo sapiens… Could it be that homo sapiens are the damn robots they seem very keen to create?

Instead of the elaborate make-up and clown character grimaces I’m used to, Histoire d’un Clown by Jae-Heon Choi and Ji Min Lee with the Mousai Dance Company hides behind these porcelain-like fixed-face masks that I’m wearing with Japanese connect theater. They do a clown act that’s half vaudeville, half stand up…

Eunhye Ku’s See-Saw smoothly blends hip-hop and contemporary phrases into what looks like a “battle format” to me: damn interesting. With a team of four, Ku evokes present ‘seeing’ and past ‘saw’ and, as he writes, ‘through dance, two complementary actions alternate to propel her forward, out of sight. A touch touches…I want to make connections.” Which all sounds to me like someone trying to give my mindset about “ying & yang” a serious boost…

And so it ran throughout the SOUM program: new interpretations of familiar things, new interpretations of new things and unfamiliar familiarities, whether Eunhye Ku’s See-Saw or Marco Chenevier’s solo Bach Sonata e Danzate, where he “either performs a physical concert or a sound dances choreography” or… Sun-Hoo Yoo’s Elegant Universe solo.

In Elegant Universe, Yoo’s active and sensual dance blossoms in front of a straight-backed lone musician (or sonic philosopher), formally in what I assume is a ‘traditional’ robe, making… ‘sounds to think about’: long drawn-out tones of a – I suppose “traditional” – hand drum, gong bell and paper thief. Yoo says of this dance performance, “We drain and draw energy from a new universe to transmit its hope and beauty to Earth.” And that was it, I felt that and more; it ended with a happy laugh from me.

So this Franco-Korean co-creativity sphere in Belleville is proving to be a good and insightful idea. I hope Regard du Cygne hosts again next year (and the year after).

In the meantime, put SOUM on your bucket list. There may be a dance venue near you.