Superhero comics are a funny animal. Monthly superhero comics are epic sagas that are part of our modern mythology — but they’re also not written and drawn by superstars, but by people who are just as likely to be your accessible Twitter reciprocity as they are to write a comic to be filmed in a billion dollar movie. They are also published quickly enough to respond to reader feedback within a few issues.

At best, this can make the community feel tight-knit and welcoming, bound by a shared love of these silly stories. At worst, it can make the relationship between readers and creators incredibly toxic. And one of the ways the latter manifests itself is as my least favorite comic book trope. The closest TV tropes site I could find was This Loser Is You, but I like to call it The Reader Is The Villain or The Superboy-Prime Effect.

What am I talking about? Well, Superboy-Prime was originally a hero, an alternate version of Clark Kent from Earth-Prime, a universe intended to be similar to our own. This universe was destroyed in 1985 during the Crisis on Infinite Earths, leaving Prime as the sole survivor.

He then disappeared for nearly 20 years, returning as a villain in the 2005–2006 crossover event Infinite Crisis. Furious that his world had ended while the main DC universe survived, he attacked the heroes, slaughtered a number of C-listers in cartoonishly graphic fashion, and killed his main universe counterpart, Conner Kent, before finally ( temporarily) was defeated.

However, I’m less interested in what Prime does than what he says while doing it. Again and again he accuses the heroes of behaving like villains, not behaving like heroes should be, but “heroes who are polite and brave and honest” as they used to be. “You’re ruining everything!” he yells theatrically, childishly, constantly.

Further context: I had to choose between using this image as my Superboy Prime example or one where he rips off a hero’s arm on the panel.

Let’s put that in context. Superboy-Prime turned villain during a particularly dark, violent era in the medium’s history. In the years following 9/11, both DC and Marvel were obsessed with tales of moral compromise, faltering heroes, and Pyrrhic goals justifying heinous, unforgivable means. Identity crisis and civil war are the best-known examples, but by no means the only ones. In the second half of the 2000s, beloved heroes killed, mutilated, tortured, and lobotomized their enemies, and deceived, manipulated, erased, cloned, and sometimes even killed their friends.

Superboy Prime was the result.

Superboy-Prime is the legitimate fanboy who’s furious that comics aren’t the feel-good tales of heroism he remembers from his youth. It’s not a subtle metaphor, but it’s particularly evident in a story where he manages to return to Earth-Prime, where he moves into his parents’ basement and spends his days reading comics and tackling the DC forums troll. Got it? Do you understand? Do you???

Looks. I was on twitter. I know how obnoxious some fans can get. But “If you don’t like my work, you’re a mass murdering hysterical kid who’s also a big loser” seems like a pretty immature response to negative feedback.

Superboy-Prime is far from the only example of writers portraying their critics as supervillains, and “longtime reader tired of Grimdark” is far from the only type of critic writers are targeting. We also saw this dismissive reaction to readers from both sides of the political spectrum:

In 2016, Marvel writer Nick Spencer wrote a controversial story arc that revealed Captain America (Steve Rogers) was a Hydra agent the entire time — a story arc that many readers, especially those on the left, didn’t like well received. The following year, Spencer introduced a new group of Z-list villains called the Bombshells, a parody of left-wing activists, in Captain America: Sam Wilson. When the new Falcon, Joaquin Torres, confronts a racist expert, the Bombshells – all young, non-white males – attack the expert with murderous intent, forcing Falcon to fight them as well. All the while they yell nonsensical “woke” accusations clearly designed to make them sound young and stupid (and feminine), like “Your mere presence is extremely problematic! I can’t even!” At one point, a black woman throws a grenade while yelling, “Consider this your trigger warning!” Really. 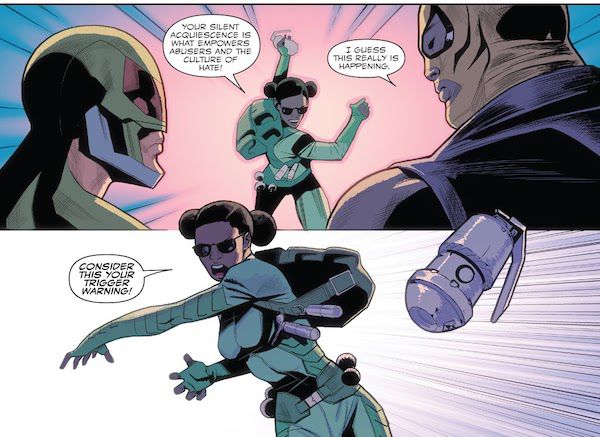 At the opposite end of the spectrum is this year’s Dark Crisis: Young Justice miniseries from Megan Fitzmartin, which follows the three original members of the Young Justice team from the late ’90s – Superboy (Conner Kent), Robin (Tim Drake) and Impulse (Bart Allen ) – are mysteriously zapped into an alternate dimension that turns out to be an idyllic recreation of their lives in their YJ days. They’re increasingly troubled by the misogyny and homophobia of this dream world thought to be created by Mickey Mxyzptlk, son of Superman villain Mr. Mxyzptlk and YJ’s self-proclaimed biggest fan. It gives them a utopia, he says, because they’ve been “replaced.” through “people who have no right to be here” — and he conjures up a splash page’s worth of characters, all of whom are queer or BIPOC or both, most (but not all) of which debuted in the last few decades. 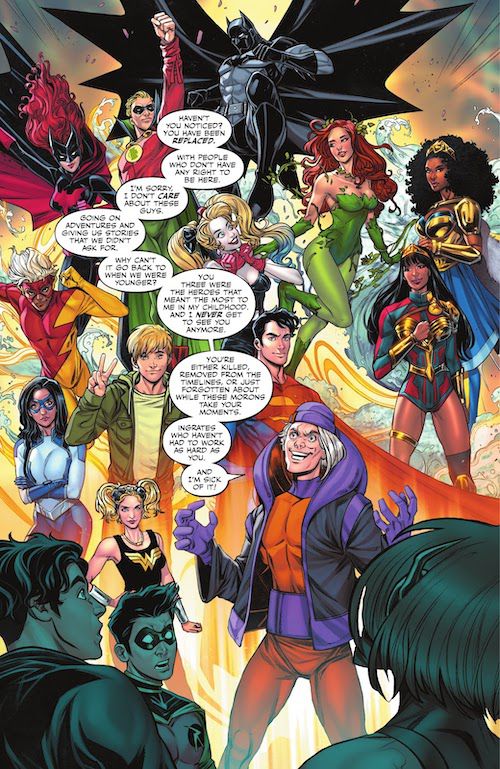 In Spencer’s comic, the villains are bright leftists who claim to save the world but actually attack the true, sane, sanely centrist heroes with disproportionate rage and empty catchphrases. In Fitzmartins, the villain is the legitimate fanboy whose nostalgia is rooted in racism, homophobia, and sexism. Politically, my sympathies are absolutely with Fitzmartin, who, incidentally, also wrote the comic in which Tim Drake came out as bi and received a vocal and extremely rude backlash from exactly the sort of reader Mickey Mxyzptlk based it on.

But part of the problem with this particular trope is how inaccurate it is in response to criticism. I would never hate a comic book artist in my life, but I didn’t like the grim-dark edginess of post-9/11 superhero comics, and I said so at the time. That doesn’t mean I appreciate being compared to a murderous crybaby like Superboy-Prime. I loved the original Young Justice comic and missed seeing its cast in comics. That’s not to say I don’t like the recently introduced new characters, or that I’m anything but excited about the advancements the industry has made in terms of diverse portrayals. And the Bombshells… yeah, no, I’m actually exactly the kind of bright-eyed scolding Nick Spencer was aiming for there, but it’s such a childish reaction to legitimate criticism that I can’t even summon up the energy to be angry about it.

But here’s the thing: Even if there’s a reader who doesn’t feel in any way attacked by either of these storylines, what’s the best scenario? They’re reading a comic with the moral, “Hey, you know who sucks? Comic readers.” That seems like an odd way to address your audience!

Are there fans who behave inappropriately towards YouTubers? Absolutely. I’m on Twitter again. I’m aware that mentions of all creators is a cesspool and that for marginalized creators this will increase exponentially. This is unacceptable, and I’ve written before about publishers needing to do more to protect their creators from this type of harassment.

But I also don’t see that the Superboy Prime effect is a productive way to address it. At worst, it’s actively harmful, and at best, still mildly offensive. In a long list of tropes I hate — women in fridges, evil clowns, gaslighting your loved ones to protect your secret identity — it tops it. And I hope that writers will soon be able to leave it in the past.