Between past and future

I. (In the academy: a conversation between master and student)

Rabbi, when will the Messiah come?

Why do you ask me? go ask him

But Rabbi, how do I find the Messiah?

No problem. He sits among the sick and homeless

Gates of the Pentagon.

But Rabbi, by what sign will I recognize the Messiah?

Look under the “lepers” (those affected by AIDS). You

will see him untie and retie his bandages one by one.

“I can be summoned,” he thinks; “Don’t let me stop you

II. (At the gates of the Pentagon)

Peace be with you, my master and teacher.

And to you, son of Levi. What can I do for you?

When are you coming, master?

Today my son. i will come today

III. (Back at the Academy)

So out with it. What did the Messiah say to you?

Rabbi, he lied. He said he would come today. But Rabbi

the messiah has not come.

Here’s what he said to you: “Today, if you will only listen

and never for long.

Tom Mandel’s numerous books include Letter to Poetry (Chax, 2022), To the Cognoscenti (Atelos, 2007), Prospect of Release (Chax, 1996), Letters of the Law (Sun & Moon, 1994) and Realism (Burning Deck, 1992). He is co-author of The Grand Piano, a ten-volume experiment in collective autobiography. Mandel’s work has appeared in numerous anthologies, including In the American Tree, The Norton Anthology of Post-Modern Verse (1st Edition), several volumes of Best American Poetry, and 49+1: Poètes Americain. Born in Chicago, Tom Mandel received his training in jazz and blues clubs and on the Committee on Social Thought at the University of Chicago. He has taught at three universities and has worked as a consultant for UNESCO, editor of procurement books, door-to-door salesman, network technology consultant and short-order chef. For two decades he was a serial technology entrepreneur, pioneering the development of social software on the web. He has lived in New York, Paris, San Francisco and Washington DC. He currently lives in a small town on the Atlantic coast with his wife, poet Beth Baruch Joselow. [This poem is the author’s version of an old rabbinic tale from the Talmud (Sanhedrin 98A)]. 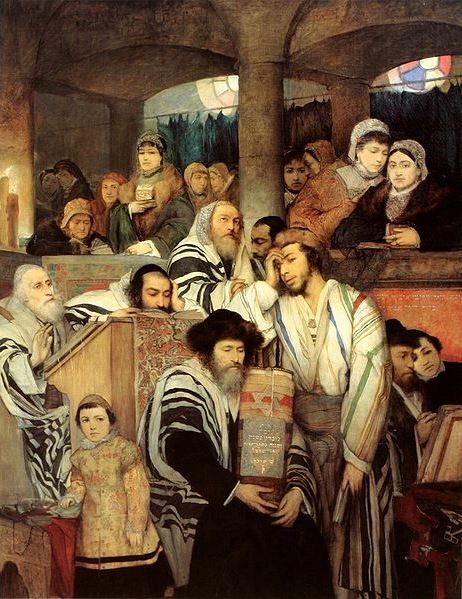 Maurycy Gottlieb, Jews Praying in the Synagogue on Yom Kippur, 1877.